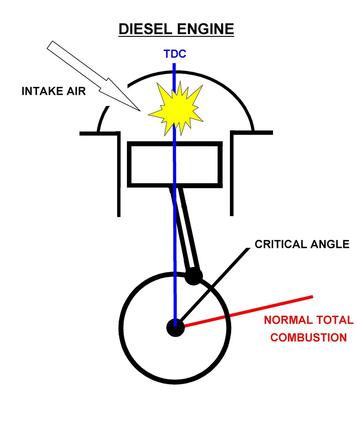 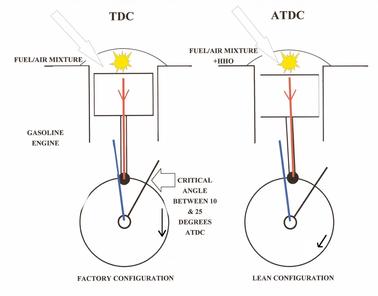 Adding HHO moves the red line in the diagram above to the critical angle. In this configuration, the diesel engine

burns 100% of its fuel and operates at optimum efficiency.

Many manufacturers employ different methods to burn more of the fuel before it reaches the critical angle including double injecting fuel before and after TDC, redesigning the piston heads, leaning the mixture as much as possible and still keep the engine from over-heating and managing the fuel with electronic sensor systems (DEC). These methods are all helpful but even the best system still has ca. 20% unburned fuel in the cylinder after the piston has reached the critical angle.

An important characteristic of HHO is that it accelerates the burn rate of the air/fuel mixture. When the correct amount of HHO is injected into the combustion chamber of a cylinder, the speed of that combustion is increased. This means that if enough HHO is present in the cylinder when the flash combustion occurs, the air/fuel mixture will be totally combusted by the time the critical angle is reached by the piston.

This increases the efficiency of the engine by 20-30% which

translates into 15-25% more miles per gallon of fuel.

HOW DOES IT WORK?

(5 MIN VIDEO AT BOTTOM OF TEXT)

In the picture below, you will see a cut-away drawing of two pistons in different cylinders. The cylinder of the left is firing according to factory specifications. The diagram on the right is firing in a lean configuration.

On every crankshaft scribed circle there is a point called the “Critical Angle” (See the black line on the crankshaft circle in the diagrams above). It is at that point, some 10 to 30 degrees ATDC, where the piston travels down in the cylinder faster than the combusting gasses above it are pushing down on it. If all of the air/fuel mixture has not totally combusted by the time the piston has reached the critical angle on the crankshaft, the piston will suck those slower burning gasses down and expel them on the exhaust stroke.

All of the combustible mixture that did not combust before the critical angle was reached is wasted. It is not used to push on the piston which is turning the crankshaft.

The air/fuel mixture burns at different rates and temperatures in the cylinder. When the air/fuel mixture is compressed to its octane rating and ignited, it will “Flash”- or explode. This is the point at which sufficient energy is generated to push the piston down, turning the crankshaft.

Engine computers are programmed to cause the “Flash” of the air/fuel mixture to occur at TDC (see the diagram on the left above). All gasoline engines run in this configuration or close to it. They have to. It is in the mechanical nature of the design.

The fuel /air mixture has a specific burn rate. Typically the air/fuel mixture is set at the factory to 14.7 parts air to 1 part fuel or 14.7:1. Automotive engineers know they have to combust the air/fuel mixture totally before the piston reaches the critical angle so as not to waste fuel. They calculate how much time is needed to ignite, “Flash”, and totally combust the air/fuel mixture before the piston reaches the critical angle. They begin the ignition at that point on the crankshaft which satisfies this need. Without fail, this is always some point before TDC-usually 4-2 degrees BTDC (set at idle speeds- see the Blue Line in the diagrams above).

When the air/fuel mixture is ignited before TDC, it flashes at TDC. At this point, some 40-50% of the total combustion is happening. The tremendous force of the combustion pushes in all directions but cannot push the piston down because the piston is sitting dead atop the crankshaft (TDC). That means some 40-% 50% of the total combustion is not turning the crankshaft. This too is wasting fuel but at least now the unburned gasses in the exhaust are not adding tons of pollution to our atmosphere. This is how a gasoline engine works.

Since a lean mixture burns hotter than a rich mixture, you cannot run an engine long in a lean configuration. It will overheat and eventually fail. HHO gas- low energy Hydrogen and low energy Oxygen will transform into a water molecule once outside energy is imparted to the gas mixture. By injecting a mixture of hydrogen gasses into the combustion chamber, super- heated steam is created when the air/fuel mixture is ignited. This not only cleans the inside of the cylinder of carbon deposits but cleans the injectors, valve stems, spark plugs and piston rings. The super-heated steam adds a small boost to the power of the combusting air/fuel mixture but its main purpose is to cool the combustion down.

As the piston travels down in the cylinder, the volume of the cylinder increases. This increase in volume allows the water molecules in the super-heated steam to expand rapidly thus cooling the combusting gasses in the cylinder. When the piston reaches Bottom Dead Center, the gasses are cooled below 300 degrees Fahrenheit. The cool combusted gasses keep the engine at its normal operating temperature.

Diesel engines operate differently than gasoline engines. Diesel engines have no spark plugs and the main part of their combustion already happens after Top Dead Center.